Solar success beside the N3 in Dublin 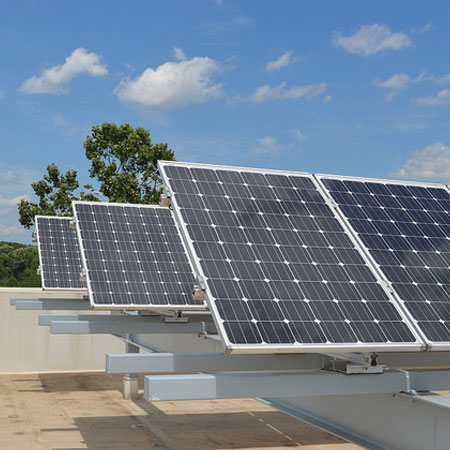 The Helsinn Group develops and manufactures cancer-care therapies with the stated objective of “building better todays” for those affected by cancer. The family-run business is based in Switzerland but has an impressive development, manufacturing and supply chain facility in Damastown, Dublin. Solar Electric was delighted to receive an expression of interest in Solar PV from the facility management team last year.

“By March 2016 we had grown to a team of six in preparation for the ‘solar rush’. We had experienced 2 bumper years, firstly Tipperary Energy Agency’s order for 717 panels on 9 public buildings in 2014, followed by Carlow Kilkenny Energy Agency’s partnership with O’Shea Farms in 2015. The farm project was the largest at that time in Ireland at 250 kWp (960 panels). There was political appetite for microgeneration, expressed in the Energy White Paper but there was more talk than action in early 2016. I admit to feeling concerned.”

Then, out of the blue, Solar Electric received an email inviting them to meet to discuss Solar PV at the Helsinn Group’s Damastown location. Partners Tom Foley and Robert Goss lost no time and there followed a quick succession of introductory and technical visits, surveys and support for internal Helsinn presentations. Electricity bills were examined to ensure no electricity would spill to the grid.

Finally, a 50 kWp system was selected and planning permission applied for. With the potential capacity on the Damastown site being much higher, this is a pilot project for Helsinn. The installation took place over two weeks in March 2017 and was carefully managed to ensure no loss of power to the facility.

Robert describes the process from initial contact to commissioning:

“The first email was so uplifting and working with the Helsinn team has been no different. There is a great ethos of environmental responsibility while making sure the investment also makes business sense. We had to defend our product as offering excellent value for money and it is so gratifying to see our panels on the Damastown roof.”

Solar Electric looks forward to continuing to support Helsinn “build better todays” for all of us through their commitment to sustainability.  The Helsinn Group monitor and publish their energy data including their usage of energy from renewable sources.  Solar Electric, through their real-time data app, will soon be contributing data on the increase in electricity generated from renewable sources and the consequential decrease in CO2 emissions.

‘Solar rush’ levels may still be illusive but confidence and pride are running high in the Solar Electric camp. As Robert says “there are many more plants suited to Solar PV. Each company that we work with is a new advocate for ours so we are definitely travelling in the right direction”.